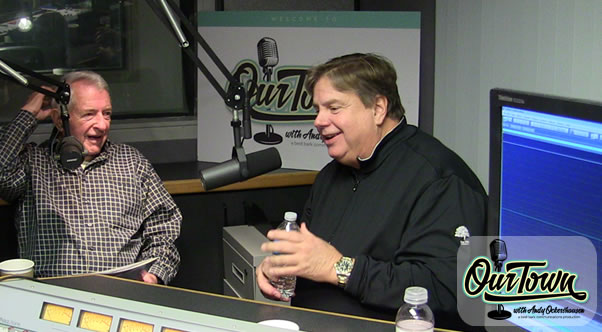 Legendary Advertising Executive Andy Ockershausen Interviews Drew Mills of Mills Marketing & Communications On Andy’s Our Town Podcast.   You can listen to the interview by clicking on the play button below.  The transcription of the podcast is also listed below.

“I am honored to have been interviewed by my long time friend Andy Ockershausen on his podcast Our Town!   Andy and his wife Janice Ockershausen from Best Bark Communications were kind enough to talk with me about my career and views on the Sports Marketing industry.  The podcast takes a look at the early days of Sports Marketing in Washington DC which includes my first sports marketing job with the Washington Wizards, the early days at Home Team Sports, and it ends with our agency work with GEICO in their sports marketing efforts across the country.  Thanks for the opportunity, Andy and Janice!  Drew Mills

Drew Mills on leaving Comcast SportsNet to start his own business ~

“I remember Jeff said, ‘You can’t leave, you have the best job in America.’ I said, ‘Jeff, I’m leaving. I’m starting my own business.’”

Drew Mills on the College Years at James Madison University

On Working for Abe Pollin and the Washington Bullets

On Working at Comcast SportsNet

Drew Mills: I remember Jeff said, “You can’t leave, you have the best job in America.” I said, “Jeff, I’m leaving. I’m starting my own business.”
A Ockershausen: Oh I remember that.
Drew Mills: He goes, “Well we’ll create something so you can still keep your foot”–
A Ockershausen: When you started, was it called Mills Marketing? Was that the original name?
Drew Mills: Yeah, same name. target=”_blank”>Mills Marketing Communications, yeah.
A Ockershausen: Well we’re going to talk about Mills Marketing and the success they’re in, and of course everything else about Drew Mills and we’ll talk about it. This is Andy Ockershausen and this is Our Town.
[Commercials] Attorney Mike Collins: Are you still promising yourself or your spouse to get your will updated and a good, basic estate plan in place? Are you finally ready to make sure you don’t leave a mess behind for your family to clean up? Give me just two hours and I’ll show you how. I’m Attorney Mike Collins, host of radio’s Legally Speaking show. Come to my seminar and I’ll teach you what you need to know about wills, trusts, taxes, probate, how to keep your money in your family. Register now at mikecollins.com and I’ll even waive the tuition. That’s mikecollins.com
Tony Cibel: Hi. Tony Cibel here to tell everybody about our newest restaurant over off New York Avenue. It’s called Ivy City Smokehouse. 1356 Okie Street NE, right next to the Hecht Company warehouse. It is terrific and we have the only seafood smoker in the District of Columbia. So when you go to your grocery stores or your delis, ask for Ivy City products. 202-529-3300, or ivycitysmokehouse.com[End Commercials]
Announcer: You’re listening to Our Town with Andy Ockershausen. Brought to you by Best Bark Communications.

On the Future of Sports Marketing

Creating success through sports!
Newsletter Sign Up. Keep Up To Date With Our Latest Activations!